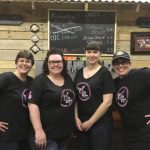 After watching The Love of Beer (2012) on Amazon in January, 2017, I was inspired.  The story/documentary (essentially) is about women who love beer, brewing, and the industry SO MUCH, they decided to break the (current) mold and become brewsters (female brewers – yes, seriously – there’s a TERM for it!).  To say I was inspired is really kind of an understatement, considering how incredibly excited I was when the movie ended.

You see, to this point, brewing had become our lives (you should have SEEN the kitchen in our condo at that point…), but I really hadn’t bought into the fact that *I* could become a brewer (brewster).  Yeah…I was toying with the idea of becoming a BJCP judge, but just so the guys would quit treating me like I didn’t know anything when I was a Steward at competitions.  I had fallen for the standard “women aren’t strong enough to do this job” thing.  ME!?  My mantra has always been “I will try anything once” – so why hadn’t I tried brewing on my own yet?  Because there’s this understanding out there that guys are the brewers, and women do the cleaning.

Okay, so to be fair, let me insert >>RIGHT HERE>> that Joe does the bulk of the cleaning, and I do an equal amount of brewing.  We have a small (see “condo” above) kitchen sink, and the pots are HUGE, and my arms are short.  And that’s all I’m going to say about that…

Anyway, back to my being inspired.  As I was sitting there, totally taken aback by these amazing women who had worked hard to get into the brewing industry, I was Googling them, their companies, the companies/breweries they had worked for, the folks who had inspired THEM, and the organizations where they were most involved.  Not only that, but I was messaging my lady-brewer-friends (other brewsters!) – sharing the info I was learning – as I watched.

And that’s how I found the Pink Boots Society.  {insert bells ringing, angels singing, etc.}  AND then I found their Big Boots Brew 2017 information.  And I was sold.  So was Tori, from SomePlace Else Brewery in Arvada, when I told HER.  I think her exact response was, “I’m in!”

Tori and I met a few times to discuss who else to invite, what we were brewing, brew day details, and figure out how we would get the information to the public about the what we were doing and why.  We are both passionate about beer and women in the brewing industry, so we decided our brew would celebrate just that – #GirlsWhoBrew.  We set brew day for March 6 (we were aiming for International Women’s Day, but schedules conflicted, so we got as close as we could), and settled on a Historic Strong Ale (strong women – strong beer).  We collected images and hashtags and scheduled some Social Media posts and waited for the day…

Our brew day began at 5pm on March 6, and ended right at 10pm.  Ryan (Tori’s husband) and Joe were present as supporters and helpers, but we did the bulk of the work.  Not all of us knew how to use the bigger system, so it was great having the guys on hand to answer questions/provide guidance.  We’ve all brewed at home, but this bigger system added new opportunities for learning.  It was GREAT!  (It was also nice to have the guys there to take pictures!) 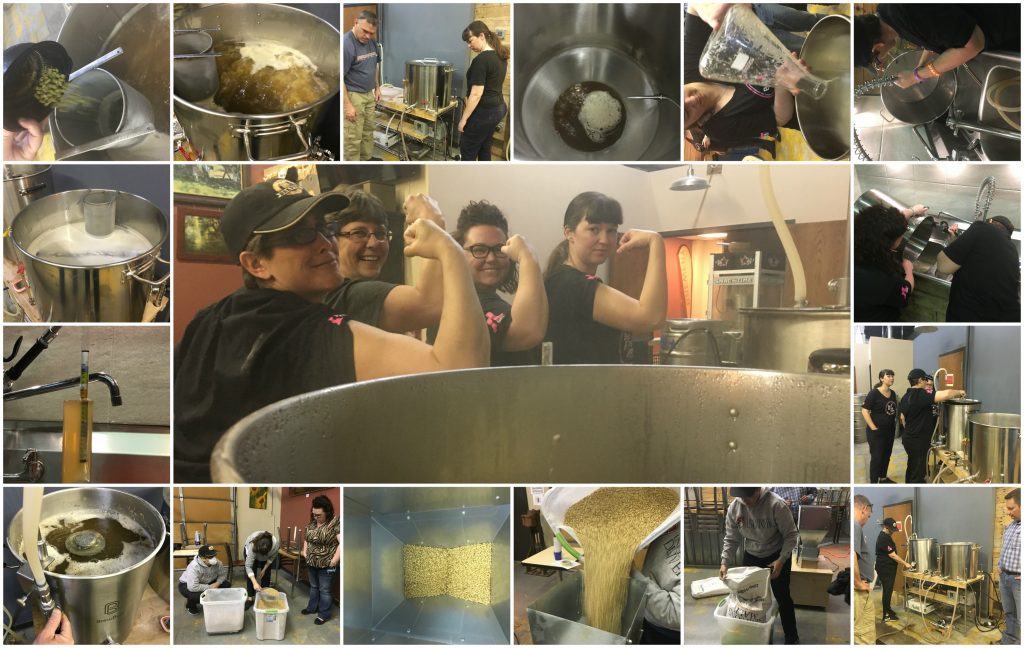 Tori sent me a video the following day – fermentation had BEGUN!  NOW we’re excited! Click the link below to watch it bubble:

So what’s IN that Historic Strong Ale?

Our Historic Strong Ale contains a lovely mix of Golden Promise, Pale 2-Row, and Maris Otter, along with Cluster and East Kent Goldings hops and Grandma’s Black Strap Molasses.  We’ll be dry hopping with more East Kent Goldings by the weekend, and then watching for our final gravity numbers in a week or so.  From there, it goes into the cooler to age until Mother’s Day weekend!

We are SO EXCITED to share this beer/experience/inspiration with fellow beer lovers!  We’ll be announcing the tapping party on Social Media (Facebook & Twitter, most likely), so be sure to like our pages and watch for the announcement & event!