Game Time at the BoB 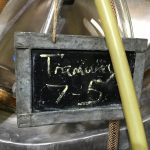 Intensity grew this past week at the BoB. With excitement and nerves and MUCH anticipation for brew day, we prepared the brewhouse so that we could get started…

And then we began…

We brewed the beers the Bob would be entering into the Great American Beer Fest (GABF) this year. The brew day started with their Social Club Coffee Milk Stout, then went on to their Tramway Rye Extra Pale Ale, and ended with their Cinderella Twin IIPA. We double-checked everything to ensure that sanitation was at an all-time high.  These are big-deal beers!  We don’t want to make any mistakes.  This was a long day – we didn’t want to leave anything to chance! 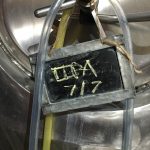 However, there was a (proverbial) fly in the ointment:  We discovered, after a bit, that the IIPA was not fermenting like it was supposed to. Due to a breakdown in communication that had occurred with the yeast supplier, yeast what would be used in a normal 7-bbl (barrel) batch of beer was delivered, not the larger quantity we ordered/needed for this IIPA.  The story ends well, though — We were able to inject yeast, and got the fermentation to finish. The final product was a slightly sweeter IIPA that will be used to create Cinderella’s Evil Wet Twin Sister’s IIPA.  Flexibility is important when you are brewing these large batches of beer, as anything could go right OR wrong, and you have to be able to think on your feet to meet each challenge head-on.

There is never a dull moment at the brewery.  So, as per usual, after all the brewing, we worked on cleanup so the brewhouse was ready for the next batch of beer.  In the mean time, let’s enjoy a beer.  We deserve it!