The ProAm Competition is a GO!

Our Loggerhead Porter has been accepted as an entry in the ProAm Competition at the Great American Beer Fest, which will take place in October, 2016.  After winning a second place medal at the 8 Seconds of Froth Homebrew Competition in Wyoming in May 2016, our Loggerhead Porter became eligible to compete in the ProAm. We were a bit concerned about finding a sponsor so close to the submission date, but the BoB came through for me, and we are IN!

Colleen and I worked with the great folks at the Bob to brew this experimental Porter, and it is currently in a 46 degree lager environment at The BoB.  We will submit it for judging during the first or second week of September.  To say we are excited would be an understatement! 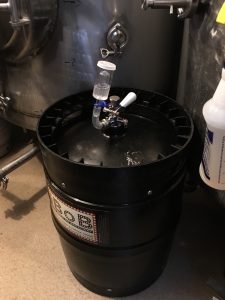 The Loggerhead Porter just chillin’ away.

In addition to the upcoming ProAm, we have two beers entered into the Arvada On Tap event that will take place on July 23, 2016.  The beers that we entered into this competition are:  “Jack’s Amber,”  and “Colleen’s Blueberry Blonde.”  This is a smaller competition, and we are hopeful to receive some solid feedback in order to improve the beer going forward.

The last weekend of July is our biggest competition thus far.  We entered 5 of our beers into the Liquid Libations contest at the Denver County Fair.  The beers we entered for this competition are:  “Jack’s Amber,” “Colleen’s Blueberry Blonde,” the “Peach Pi Blonde,” the “Sassy Plum Cherry Blonde,” and the “Loggerhead Porter.”  In addition, on both Friday night and all day Saturday, I will be judging as a BJCP Judge and Colleen will be a Steward.  If you’re at the fair, stop by and say hello!

All of these events are supported by the American Homebrewers Association.  We are so excited to see how we fare at the fair (haha) AND the ProAm Competition!