The Mad Scientists At Work

July 17th, at The Brew On Broadway (BoB) – Brewing scientists at work today:

After the flurry of activity over the last two weeks for GABF, Sam and I were going to brew a 1-bbl (barrel) batch on Sunday. The plan was an Old English Ale, but we were not given the brewing instructions. After deliberation and finally getting a hold of Paul, Sam, Zach, and I were given free reign (well almost, no saisons) to brew what we wanted. {With trumpets sounding…} The Two Men and a Brewer Pale Ale was born. 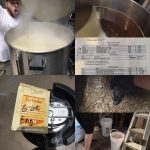 The mad scientists at work (Shhhhhhhh, don’t tell the boss the recipe is on here)

Since there were three of us, we drew straws to determine what part of the recipe we would each accomplish. Zach drew the malt, Sam the hops, and I took care of the yeast. We were each able to let our talents shine – both our scientific know-how as well as our brewing creativity.  It was a great time brewing what will be a fantastic beer!  The three of us had a fun, relaxing time creating this beer. No expectations except what three mad scientists could create.  This is what it’s all about!