Since I had to work at my “real” job for most of the day, today at the BoB started a little later than I was hoping.  I was able to help finish with a 7-barrel batch of beer, though, and learned some new techniques.  As seen in the pictures below, we drained the boil kettle through a lauter grant.  A lauter grant is a smaller vessel that catches the wort and prevents excess grains from getting into the boil kettle or in this case, the fermenter.  Kind of like a buffer between the grain and the wort that increases efficiency and, thus, helps us make better beer.

Once the wort has been strained through the grant, it is pumped through a heat exchange to drop the temperature from boiling all the way down to a cool 65-68 degrees for pitching the yeast.

Utilizing a pump with variable-flow adjustments makes cooling the wort a breeze!

Once the wort is cooled, it is then sent through a manifold that has a port to inject oxygen which will encourage the start of fermentation within the fermenter.  As we know by now, oxygen and sugar make for happy, healthy yeast and a fantastic fermentation!

Once done, the yeast is placed into a corny keg and then injected into the fermenter with CO2.

The next day fermentation is cruising along.  I’m looking forward to my next internship day at the BoB, and loving all that I am learning about larger-scale brewing while I am there! 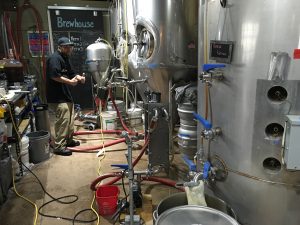 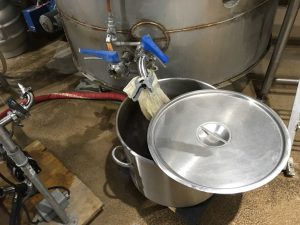 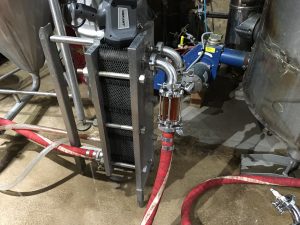 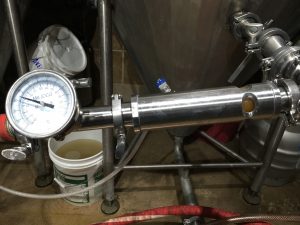 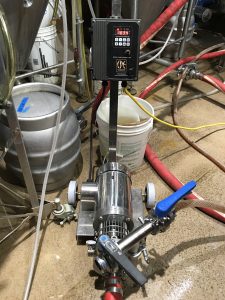 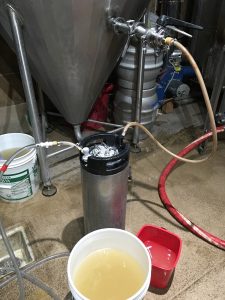